Working is a musical with a book by Stephen Schwartz and Nina Faso, based on Studs Terkel's book Working: People Talk About What They Do All Day and How They Feel About What They Do (1974), which has interviews with people from different regions and occupations. One of the lesser characters in the musical also appears in The Great Divide, highly recommended here a couple of days ago.

When I first read about the musical, I began to worry that Rex Winship might be a fictional character, a figment of Studs Terkel's imagination. But no, he's real -- a character from recent American history.

Andrew says, "Rex Winship used the pattern of money and markets to predict future society and economy. I planned on reading about trading [Mr. Winship was a successful dealer in futures], but all I can think about is his foresight.

"The prediction that really resonates and truly amazed me was when he declared that there would be tremendous debt in the nation’s future because everybody would become consumers rather than savers. That exact situation is presenting a great problem for the nation’s economy. I am in awe of these predictions and truly do not understand how he could have had such great foresight."

See now, Rex Winship had it all figured out, way back in the 70s and 80s! And he knew what needed to be done to counteract the downhill trends that he saw in those days, something apparently eluded Jimmy Carter, who (as Walt pointed out yesterday) still hasn't got it figured out. I chose this Rex Winship quote from The Great Divide:

"If we lowered the taxes and cut down on government spending, the business sector will explode. The first thing I'd cut would be the military spending. Blowing up bombs...doesn't help the economy.

"I wouldn't cut welfare payments. When you give money to somebody on welfare, she spends it to buy food and clothing. Jobs are created.... I would always give poor people money because they spend it."

Right on, Rex! It all seems to simple, and yet the bloody fools in Washington are yammering about increasing the debt limit, cutting welfare, keeping the "stimulus" going, and all the other magic which everyone seems to think it's up to the government to perform.

The government, and only the government can solve America's economic problem. Who do they think put the USA into the mess in the first place?! Ron Paul is right. I wouldn't be surprised if Mr. Paul read Rex Winship!
Posted by Walt Whiteman at 5:54 PM

Walt is grateful to the good folks at Blazing Cat Fur for giving us the link to John McWhorter's new book The Elect: Neoracists Posing ... 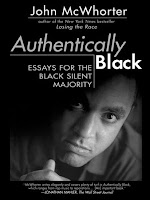